Overtaken 2: Where Are They Now

Overtaken 2: Where Are They Now 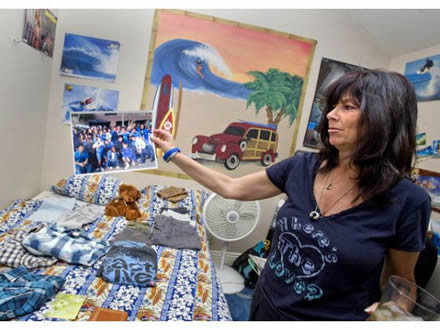 Jodi Barber is a brave and beautiful woman with a message. I watch with admiration as she finds the strength to her rise above the grief of losing her 19-year-old son Jarrod to a drug overdose, dedicating her time and energy to stop the drug epidemic in our society.

She’s on a warpath to keep kids clean, doctors responsible, and communities educated. She is a tireless general, yet there is softness in her blue eyes and love in her heart. At her core, she is still very much a mom.

Her documentary, “Overtaken 2, Where Are They Now” is a selection in the Newport Beach Film Festival. In my opinion, mandatory viewing for all parents, pre-teens and teens.

For those of you who missed “Overtaken,” Barber’s first documentary (co-produced with Christine Brant), check it out on YouTube.

The gloves are off in this film. Real drug addicts who look like your kid and mine, teens and young adults from Newport Beach and surrounding affluent areas of Orange County. Well-educated, well-read, well-travelled, from loving families who with countless opportunities, frankly discuss the horrors of addiction. How it destroyed their relationships, broke apart their families, landed them in the hospital, or in jail. How they were overtaken by their addictions, losing just about everything.

“He started with marijuana, like every other addict I know,” said Barber. Opana, a painkiller prescribed to stage four cancer patients, ultimately killed her son, who overdosed at home while watching a movie with friends late at night.

“I never heard of a pill called Opana. If I knew then what I know now, perhaps my son would still be alive.”

“Many people are still unaware that opiates such as Vicodin, Oxycontin, and Opana are heroin in pill form,” said Barber.

Once hooked, it’s common that one can no longer afford the addiction and switch to the cheap tar heroin from Mexico for the same high.

Barber speaks and shows “Overtaken” at hospitals, drug rehabs, juvenile detention centres, and schools. She will do the same with “Overtaken 2.” It’s especially important to reach kids ages 10-13, because that’s the age they start to experiment, Barber explained.

Talking to Barber, one can’t help but be inspired. Her determination knows no bounds. She takes phone calls every week from distraught parents who are seeking help.

“I get my strength from God and Jarrod. My inspiration comes from the teens and young adults who remain clean and sober,” Barber said. She is also grateful to her son Blake, 19, who is now the age his only brother and best friend was when he died. Blake shares his mom’s passion and speaks out against drugs.

Barber is quick to thank the people who have come together to help her make “Overtaken 2,” including Kard Bombe (kb films), videographer/photographer for his long hours of filming and editing, and dedication in spreading drug awareness, as well as all the professionals in the field of addiction.

Is addiction caused by genetics? Is the brain set up when born? Is addiction a brain disorder? These questions are answered in the film.

Lastly, Barber said she is so grateful to the young adults from the original “Overtaken.” Their message in “Overtaken 2” is hope. They all agree they never thought it would be possible to change their lives around and be as happy as they are now, clean and sober.

“Overtaken 2 Where are they now” screens Sun, April 27 at 11 a.m. at The Triangle 1 in Costa Mesa. For tickets, visit NewportBeachFilmFest.com.